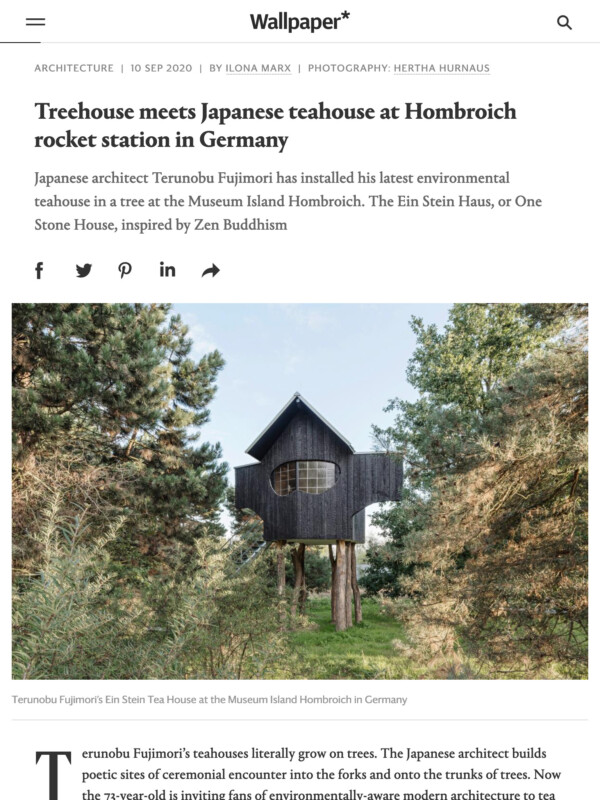 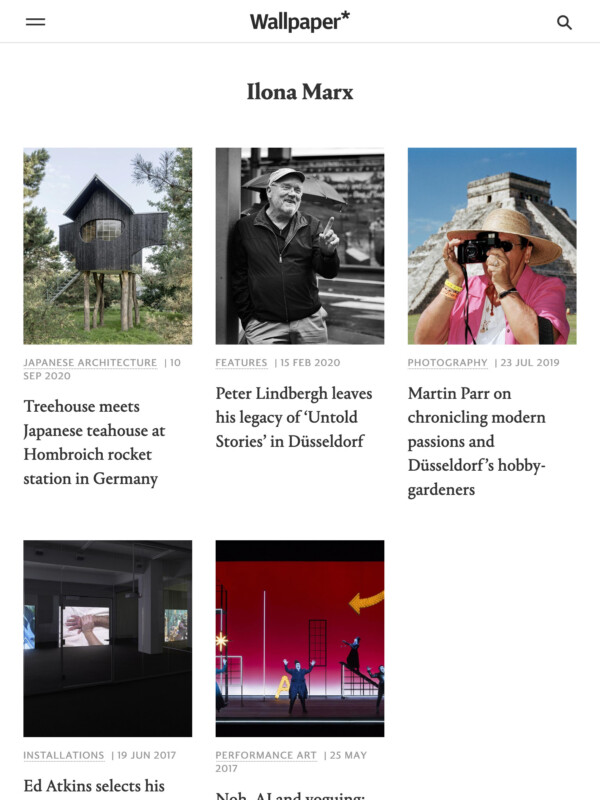 Detached from space and time

Terunobu Fujimori’s teahouses literally grow on trees. The Japanese architect builds poetic sites of ceremonial encounter into the forks and onto the trunks of trees. Now the 73-year-old is inviting fans of environmentally aware modern architecture to tea at the Hombroich rocket station.

The winding path through the pine trees studded by single stone slabs ends in a small clearing. Glance up and there it is, 3 metres high, pitch black and sitting on stilts made of robinia wood: the latest teahouse by Japanese architect Terunobu Fujimori, designed for the Hombroich rocket station, the first permanent one of its kind in Europe. 19 steps up a narrow metal staircase lead to the tree house with its carbonised façade. „The traditional method, by which the wood is blackened by subjecting it to a few minutes of fire, is called Yakisugi and is typical for Fujimori’s work,” explains Frank Boehm, the curator of the project and the accompanying exhibition. “It protects the wood from weather and damage by insects.” In the oval of the interior, the walls are panelled with oak. Any geometric formality is broken up here, and a trompe-l’œil effect makes the roof appear to curve inwards.

Traditionally, Japanese teahouses are laid out with tatami floor mats, but here visitors sit on an organically shaped bench in a semicircle. Before them, the hearth for tea-making is inset into the table. As always with Fujimori, where possible he uses natural materials. Everything appears to be handmade. Wabi-Sabi, the beauty of the irregular, is a design principle of the master builder. A kidney-shaped sliding window opens to the south with handmade, leaded windowpanes. It reveals an unobstructed view of three large pine trees and the Lower Rhine landscape beyond.

“When designing teahouse architecture, you have to create a separate world that is distinct from everyday life. The key is to let something float above the ground,” says Terunobu Fujimori. Like the traditional Japanese teahouses, his buildings serve as places of contemplation and cultivated encounters, yet Fujimori’s designs undermine every architectural canon. You will search in vain for straight lines and coherent geometries in his work. Instead, he uses pencils and crayons to draw surreal, fantastic buildings that could have been lifted straight out of an Anime film, a Hieronymus Bosch painting, or even a Gallic village. Rustic dwellings, perched precariously in the forks of trees or on high stilts. It is almost as if this free spirited man is fulfilling his childhood dreams by designing escapist tea tree houses.

Although Fujimori, who is one of the most significant architectural historians in his country, did not begin working as an architect until 1990. In the last three decades he has constructed one or two buildings a year, including numerous tearooms and teahouses. However, these are mostly for private clients, including his first teahouse Ishiya-tei (House For One Night) for the former Japanese Prime Minister Morihiro Hosokawa. “After its completion, for the first time, I didn’t want to part with a house,” Fujimori recalls the awakening of his passion. As a result, he started to built three teahouses on his own property in Chino, Nagano Prefecture: Takasugi-an, the Too-High Teahouse, Hikusugi-an, the Too-Low Teahouse and Soratobu dorobune, the Flying Mudboat.

Today, there are about a dozen permanent teahouses worldwide, and no two are alike. “Because of their distinct personality, teahouses have something human-like about them. That’s why they have names like people,” says Fujimori, providing evidence of his wry humour. He christened the teahouse on the island of Hombroich the ‚Ein Stein Haus‘ (One-Stone-House). The idea of a single stone has a special meaning in Zen Buddhism, it is the island around which waters rush, providing peace and harmony. But at the same time, his first permanent teahouse in Germany is a homage to the great German physicist of the same name, Einstein. From September 4, 2020, you will be able to reflect on your own philosophical outlook while sipping Matcha tea and floating above the world, as if detached from gravity, space and time.

In the teahouse, says Terunobu Fujimori, there is no hierarchy and no status. This has been true in Japan for thousands of years. Whether samurai, merchant or farmer – in the teahouse everyone sat at one table and everyone was treated as equal. Fujimori likes this idea. But he wants more: not only to bring people closer together, but also closer to nature. With his deeply-rooted lightness of touch, in Hombroich he has pulled it off once again.

The accompanying exhibition ends on November 29, 2020.