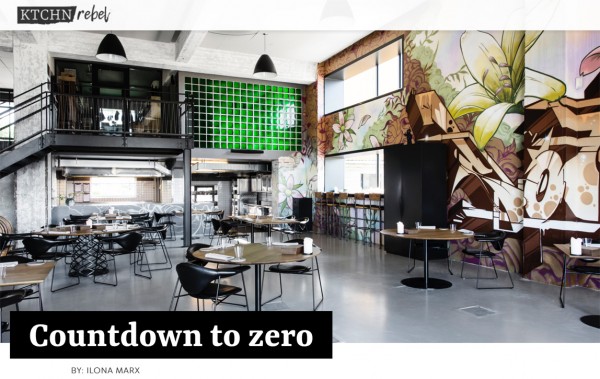 Bertha likes eating leftovers. Knowing Douglas McMaster, it’s not all that surprising that he’s given his compost machine a name. The man behind Silo, a restaurant in Brighton, is famous for his uncompromising attitude toward reducing waste. In 2014, he became one of the world’s first restaurateurs to carry the zero-waste concept to the limit— and composting leftovers aerobically, with the help of bacteria, is a pretty big part of the philosophy.

Other factors are important, too, of course. He needed local suppliers that were willing to deliver their products in reusable containers. He needed equipment for special processes like fermenting and dehydrating. And, of course, he needed experimentally minded customers who weren’t afraid to try dishes that most other places wouldn’t dream of serving.

Fortunately, that customer base is growing continuously. The zero-waste idea has taken hold, both in Brighton and in a number of other large cities. Helsinki, for example, has Nolla, which is Finnish for (what else?) zero. Three international culinary stars—Carlos Henriques, Luka Balac, and Albert Franch Sunyer—have come together to combine high culinary standards with noble ecological principles. “Refuse, reduce, reuse, recycle, and rot” is their rallying cry, their way of encouraging their customers to think about reducing waste in their everyday lives as well. Nolla isn’t just impressive for its commitment to sustainability, though—the food also happens to taste great. Grilled celeriac with apple cream, Viltgård reindeer tartar with roasted beets, and pike in sugar and salt with winter apples are just a few of the Nordic-inspired highlights on the menu.

Speaking of Nordic, more and more of Noma chef René Redzepi’s former associates have struck out on their own in Denmark. One of them, Matt Orlando, has been experimenting with the zero-waste approach for the past five years. Amass, the California native’s fine dining locale in Copenhagen, follows the nose-to-tail principle, and now he’s turning his attention to sustainable brewing with Broaden & Build, his new zero-waste restaurant and brewery slated to open next spring. Like Amass, the new location will recycle water for cleaning or garden use. Leftover food will go to the compost pile; skin, seeds, and stems will be dried and made into misos or snacks. This early in the planning stages, of course, Matt isn’t quite ready to divulge the secrets of his sustainable brewing processes.

Mads Refslund, who co-founded Noma and now lives in New York, is more forthcoming on that front. His 2017 publication “Scraps, Wilts, and Weeds: Turning Wasted Food into Plenty” is designed to build awareness of the food waste problem in the United States. Now, Refslund is planning to present his sustainability ideas to New Yorkers in the form of a new restaurant, where a fire pit and a block of ice will represent the two contrasting pillars of the ancient kitchen. His mission is to demonstrate just how delicious simple, sustainable, local, zero-waste food can be.

It’s all great news, but there’s a long road ahead. According to the Nolla team, the average restaurant still produces around 70,000 kg of waste every year, and agriculture and food waste are still to blame for the majority of the greenhouse gases produced by humans. Douglas McMaster and his comrades-in-arms could use a little help out there!